A Butterfly dome: what is it for? Why would anyone go to pay and see butterflies when there are so many outdoors in springtime?

Until recent, butterfly houses were more curiosities than mainstream attractions. In South Africa, they were mostly known to and perhaps reserved for Euro-Africans. The general black population knew about parks and protected areas and reviled them for what they symbolized. Spatial separation and engineering ensured that few blacks were aware of the existence of science museums, butterfly domes, conservancies, breeding houses or educational centers. It is hard to say that things have changed during the past decade with the opening up of the country. Few blacks still have the time, space and resources to visit wildlife parks or more so butterfly conservancies and domes. Even so, most still have a slanted view of such visits as “a white thing”. This placed me in a curious situation for both studying and having a strong attachment to the “natural” environment, and thus an interested in bio-cultural diversity. Often I became amused I found myself becoming the object of curiosity or inquiry as I went about studying various projects, or interviewing people from the black and white divides in South Africa. My placement as such indirectly gave me access to how different racial groupings, classes and communities were affected by discourses and practices of nature and biodiversity in South Africa.

One of the first contradictions I found with the entrancing narrative of Manukelana Indigenous Nursery and Art Project is that it began on a wetland. In other words, the indigenous nursery was constructed out of a pan in order to save an indigenous forest, which could then help restore the freshwater balance of the estuary. Not however until an exotic pine plantation (SAFCOL) was cleared to make way for settlement by evictees of Dukuduku Forest.

We have two cases of forestry migration here: the first, a case of secondary succession when Dukuduku Forest first appeared in the estuary or wetland centuries ago; and a case of tertiary succession, following discourses of biodiversity and climate change in the late 20th century.

The project founders were aware of the first contradiction and pointed it out to me – that, it is likely there was no Dukuduku Forest centuries ago in the wetland, and that the wetland was all water until a case of secondary plant succession occurred. The project founders, the Greater St Lucia Wetland Park that encouraged them in the 1990s, or subsequently, Isimangaliso Wetland Park and World Heritage Site, or even so, Induna Baba Shikeshela who was anxious to oversee the “development” of the six hectare site, did not envisage that they were participating in a case of tertiary succession, which might not help restore freshwater flows in retreating pan that was the site before the arrival of SAFCOL and Siyaqubeka.

Another contradiction I discovered with the Manukelana Site and with much of Dukuduku Forest and Khula Village is that it was a wetland with vast pans of water breaking up. According to Bro Musa Zikhali it was much easier traveling through the estuarine parts of the forest, or moving building materials and crops by boat. The boat in the picture below was crafted by Brother Musa Zikhali, who is facing the photographer with the broad hat. Baba Phungula is holding the flag. Ernest Mlambo is at the right end of the boat watching Phungula. Seems like Mduduzi is the one with the oar. How Zikhali came to make the boat is tale that unfolds the theme of bricolage – one that features strongly in the making of Manukelana. Much of Khula Village, Phungula and Zikhali said, was water at the time, particularly during the flooding season. There were previously two boats in the pans in Dukuduku and Khula, one was owned by the Mkwanazis, and the other by Manukelana. Notice the Rastafarian flag, which is that of Jamaica. What was a Rastafarian flag doing in a boat in forest in South Africa? How do the themes of water and territorial ideologies come together in Dukuku Forest and Khula Village? 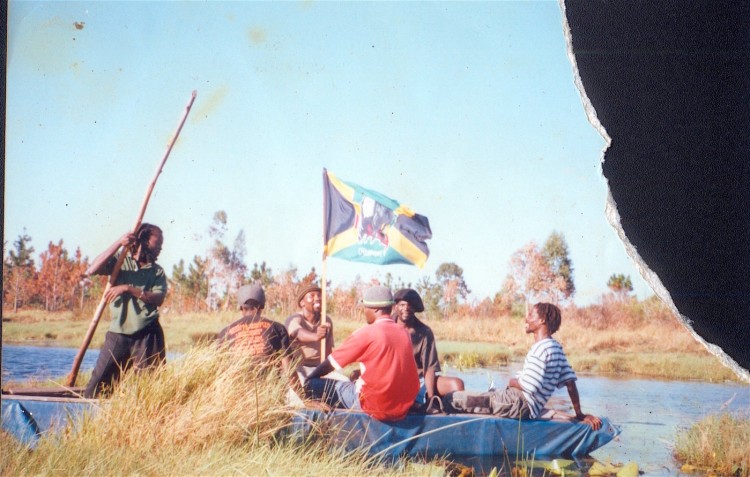 Though grenadillas flourish in Dukuduku Forest, they’ve been rolled back like most twines, to make way for space for building homes and road s 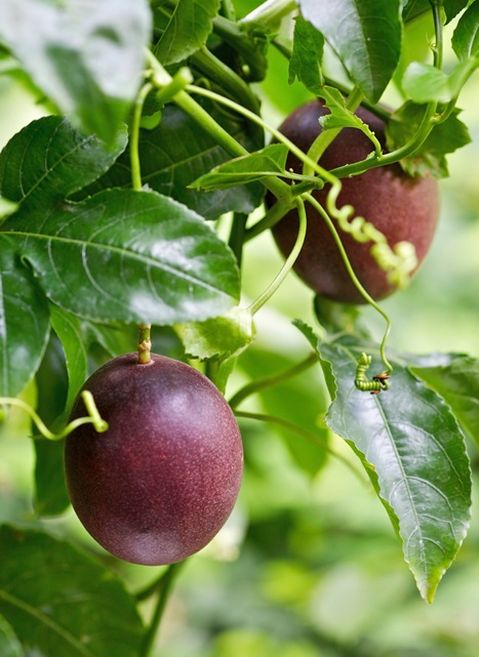 talls. In St Lucia Estuary, they grow along the hedges and fences of MacKenzie St – more as decorative plants rather than fruit plants. I always filled my backpack with ripe fruits on the way home, though they were abundant at the women’s craft and fruit market at 1kg for 25 Rands. The women pick up most of them from Dukuduku Forest and make quite some good money from the fruit while each season lasts. Only problem is that the fruits are not treated as they grow freely. They are readily attacked by pests during storage, which makes them crumple up. The result is that most of the bags being sold are thrown away into the dumpsters by the market when they fail to sell. Again, all the granadillas are of the light green variety, which is very sour, and not of the above sweet and reddish variety. Evidently, a hybrid species would make more sense in the forest and estuary.

In parts of tropical Africa where they grow, granadillas remains fruits of the commons – growing free, and free for anyone to harvest and eat if you belong to the neighborbood, vicinity or community. I found several colonies of granadillas in the six hectare garden above: one that had taken over a fence and the frontage of a partially abandoned large shade house in the distance behind the dome, another to the left over the fence with Bro’ Musa’s farm garden, and still another, on the fence with the side footpath that leads into Khula Village. While not being a scientist or farmer, I have followed the plants on the streets of St Lucia, in Manukelana Garden and Dukuduku Forest almost weekly as we went collecting butterflies for the dome. They bear several times a year, but have been either rolled back as intrusive or cleared to make way for space for other activities.In other words, the granadillas are invisible to the project managers and tour guides.For over several months, I kept checking them, and I found them visited by bees, butterflies, insects, birds, and sometimes green snakes.They are a fruit of the commons, and nothing delights me when we come across pupils rushing into the bushes to harvest them and eat on their way home from school early afternoon as we return from collecting butterflies in the forest. Sometimes they throw the empty balls at one another and dart. It is great to know that when the kids are hungry, the forest gives them freely to eat. They do not have to buy, at least, for now. Granadillas only grow on the subtropical coastline of Kwa-Zulu Natal from Margate, where the reddish variety grows (you’d find them in MacBanana Farm, where there’s a butterfly dome and a lovely grocery and fruit store) up along the coastline till Kosi Bay). Hardly do African communities grow them for the market. I was always attracted by their greenery and the frequency with which the twines regenerated each season and bore fruit. 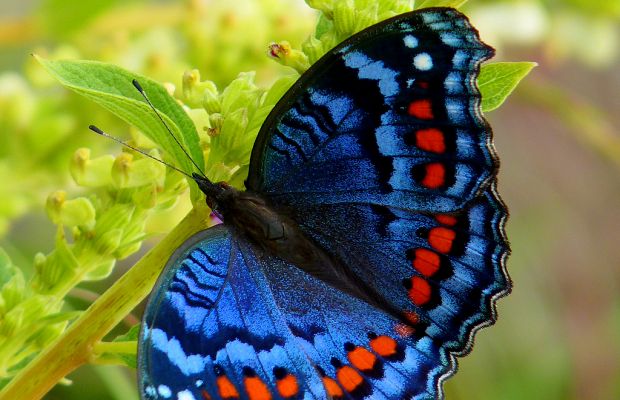 Designed to simulate a tropical rainforest environment, butterfly houses are more than just pretty playgrounds for these dazzlingly colourful, fragile creatures. Besides allowing people to enjoy a fantasy-like experience surrounded by fluttering butterflies, they play a bigger role in butterfly conservation, by educating the public on their uniqueness and importance.

South Africa has 671 known species of butterfly, of which the more common are the painted lady (with black and orange wings), the citrus swallowtail (black and cream wings and circular patterns resembling two eyes) and the African monarch (wings with a black and white border infused with two-tone orange).

Butterflies in South Africa have life cycles that are closely linked with specific plant and ant species, and many only occur in very small, confined areas. South Africa’s butterflies are also vulnerable. Two, possibly even three, species have become extinct, and a further 38 species are listed in the Red Data List, meaning they are threatened with extinction in the near future.

Butterfly education is a key part of the butterfly house experience, providing nature lovers with ideal surroundings in which to identify, admire and learn more about both exotic and indigenous butterflies. During warmer weather, the butterflies are more active, but opportunities for up-close sightings improve when conditions are cooler.”

For a beautiful article by Dianne Tipping-Woods, click Link.

The Rhino Memorial is part of the affective landscape of Manukelane Indigenous Tree Propagation, Arts and Crafts and Butterfly Project. Notice the location of the memorial on the highway, where it intersects with the footpath from the local primary school.

A wetland on the way to a wood or forest patch in Dukuduku Forest.

Citizen Science in Action: Sabelo is graduate in Accounting from the nearby University of Zululand. Over the past few years, he has developed as a butterfly tour guide at Manukelane, a keen attention to butterfly reproduction and entomology. He’s anxious to change course and foster his education in Conservation Biology.

Sphe, the newest at Manukelane, is a graduate from Vezobala High School, a community-run school in Dukuduku Forest. He hopes to train as an elementary school teacher next year. However, if he’s able to obtain state funding, then he might consider a career in Environmental Education and Tourism. He is very interested in prey-predator relations among wildlife.